For almost 100 years, the City of Tulsa and Tulsa Metropolitan Utility Authority has been a visionary leader in supplying water to the Tulsa area.  As a fundamental element to Tulsa’s growth as a city and a critical resource to the city’s future, we must change and adapt to meet the challenges, demands and uncertainties of tomorrow.  In fiscal year 2012, the Tulsa Metropolitan Utility Authority undertook a comprehensive assessment of the water and wastewater systems, all while continuing to provide reliable high-quality water and wastewater services to 570,000 people. 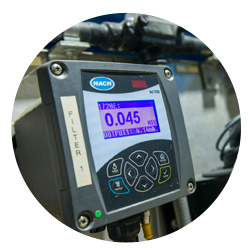 Tulsa’s drinking water comes from two sources – Lakes Spavinaw and Eucha on Spavinaw Creek and Lake Oologah on the Verdigris River.  Lake Oologah is operated by the Corps of Engineers.  A third emergency source of water is available from Lake Hudson. Water is treated at two treatment plants, Mohawk and A.B. Jewell, with a total treatment capacity 220 million gallons per day.  The water distribution system consists of 2,304 miles of pipes.

The Department also operates four wastewater treatment plants, Southside, Northside, Haikey Creek and Lower Bird Creek, with a total permitted capacity of 102.6 million gallons per day.  The Haikey Creek WWTP is jointly owned by the City of Tulsa and City of Broken Arrow.  TMUA operates the Haikey Creek plant under an agreement with the Regional Metropolitan Utility Authority (RMUA).  The wastewater collection system consists of 1,967 miles of pipes and 49 lift stations.

With the retirement of Charles Hardt, long-standing Public Works Director, the Mayor reorganized the public works functions of the City, including water and sewer, streets, stormwater, public facilities, solid waste, and engineering services, from one department into three departments. The three departments are named Water and Sewer, Streets and Stormwater, and Engineering Services. Other support functions previously performed within the Public Works Department were reassigned to various departments, including Utilities Services (billing and collections) to Finance Department, utilities call-center to Customer Care Department, warehouse and fleet management to Finance Department, and training and professional development to Human Resources Department. Effective July 1, 2011, Clayton Edwards was promoted to Director of the new Water and Sewer Department. The department manages the City’s water and wastewater systems. 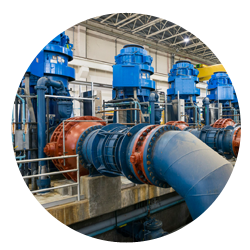 Rather than focusing on just financial, operational, or capital, TMUA chose to take a holistic approach considering all significant aspects of the utility systems including governance and organizational structure, management, operational performance, capital needs, financial condition, and legal and public policy issues. The final report was received in August 2012. Following is an overview of the findings presented.

Overall, the IMG Team found that the Tulsa metropolitan region enjoys water and sewer services that operate within industry norms for service quality and cost-efficiency. However, without significant changes, increasingly stringent regulations and the system’s aging infrastructure will combine to force water and sewer rates to grow significantly for decades to come.

IMG concluded that TMUA’s unique structural attribute (in which the governing board and owner of the assets contracts with the City for utility operating services) could be used to impose significant and lasting improvements in a way that most US water utilities cannot. IMG concluded that operating and capital program improvements could – if supported by critical new performance and asset management systems linked to the TMUA-City lease and operating contract – make durable improvements roughly equivalent to privatization, and thereby reducing future rate increases by 20 to 30 percent compared to current projections.

Going forward into FY2013, TMUA, in collaboration with the City’s administration, will set forward on several strategic and performance improvement initiatives presented by IMG.

Improvements were constructed at both the Mohawk and A.B. Jewell water treatment plants preparing for the conversion from free chlorine to chloramines (Cl2 + ammonia) as the secondary disinfectant in the treatment process.  The actual conversion and start-up was July 31, 2012.  Initial tests following start-up indicate substantial improvement complying with regulatory requirements.

Many other performance measures and operational data for FY2012 are included in the Statistical Section of this report.

The annual budget is prepared on a program basis.  Detailed annual work plans for operation and maintenance activities are developed during the budget process each year.  These work plans itemize the cost of activities and projects within each section, or function of the water or wastewater systems.  The total FY2012 budget for the Water Fund (7020) was $100,321,458 and Sewer Fund (7030) was $90,138,701.  These figures include personal services, materials and supplies, other services, transfer to general fund, indirect costs, capital equipment, transfer to capital projects, and debt service.  The following charts show a breakdown of the FY2012 operating budgets for both the Water and Sewer funds by the type of expenditure.

More detailed figures are included in the Statistical Section of this report, as well as the FY2012 Comprehensive Financial Report. 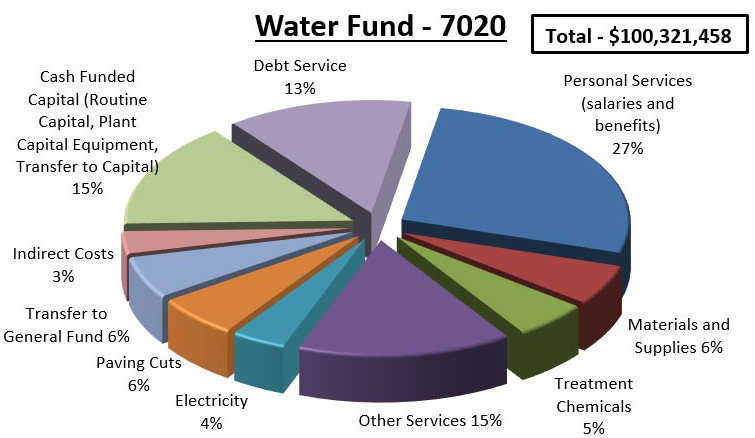 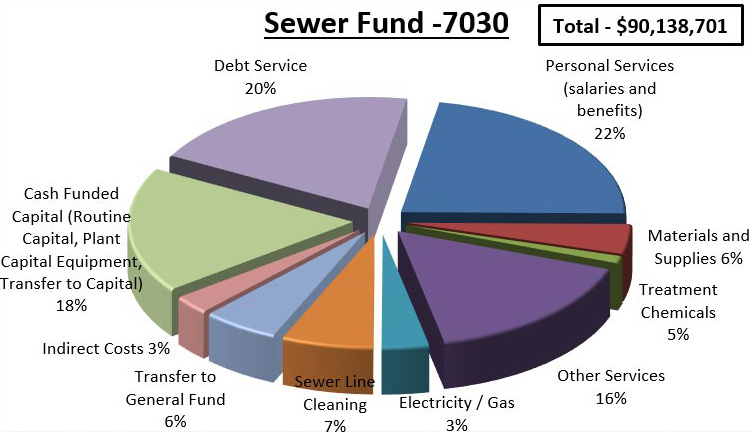 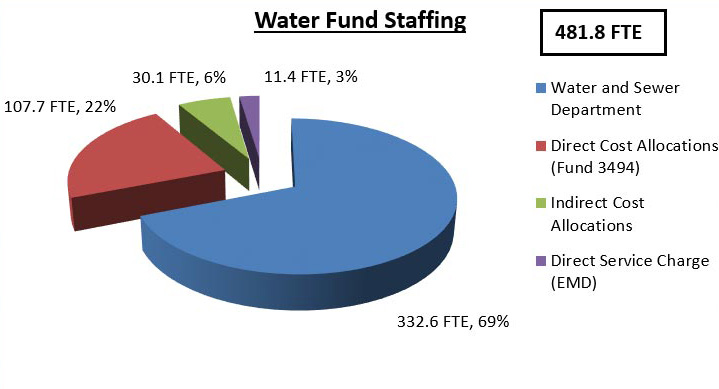 TMUA, over the past few years, has adjusted rates to accommodate the rising costs of water and sewerage services and maintaining our aging infrastructure.  In May 2011, TMUA voted to increase water rates 7 percent for all customers, effective October 1, 2011. Sewer rates were adjusted 9 percent for all customers, effective October 1, 2011.  The rate increases were confirmed by the Mayor and City Council in June 2011.

Revenue generated by the FY2012 adopted 7 percent rate increase along with increased revenues due to the excessive heat and drought conditions experienced in the summer 2011 generated about $12.3 million over FY2011 actual billed revenues and $9.9 million over FY2012 budget estimates.  Of that $3.8 million went to additional debt service and capital equipment in FY2013.  The remainder allowed TMUA to transfer to major capital projects $12.550 million in FY2013, an increase of $8.2 million over FY2012.  In FY2012 TMUA deferred $22.1 million in revenue bonds in an effort to control debt.  In FY2012, revenues exceeded outlays by $6.555 million.  The year-end balance, after reserving for the 5 percent cash operating reserve, is estimated to be $9.1 million.

The following chart shows the actual billed water revenues compared to budget for the period FY2002 through FY2012. 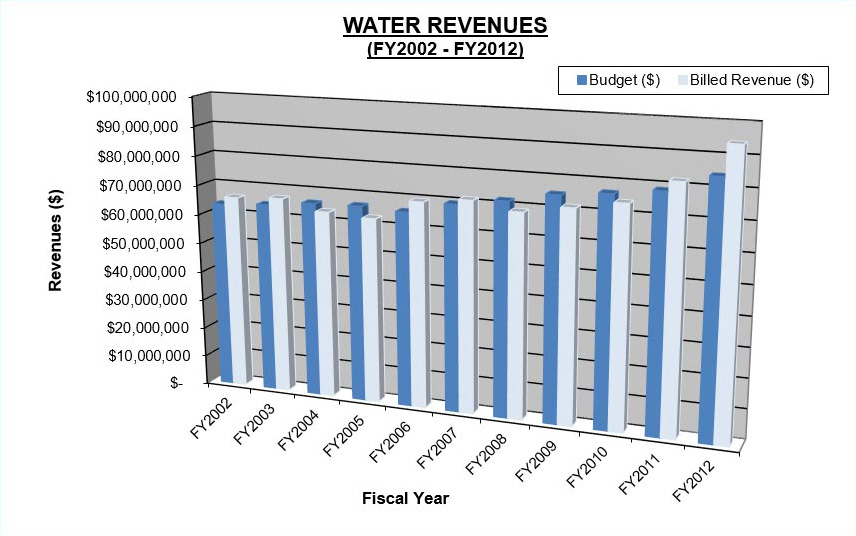 Revenue generated by the FY2012 adopted 9 percent rate increase generated about $5.3 million over FY2011 actual billed revenues and $1.0 million under FY2012 budget estimates.  Of that $3.5 million went to additional debt service and capital equipment in FY2013.  The remainder allowed TMUA to transfer to major capital projects $3.410 million in FY2013, only a slight increase over FY2012’s $2.341 million, but reducing the amount borrowed in the FY2013 capital program.  In FY2012, outlays exceeded revenues by $3.6 million.  The year-end balance, after reserving for the 5 percent cash operating reserve, is estimated to be $2.3 million.

The following chart shows the actual billed wastewater revenues compared to budget for the period FY2002 through FY2012. 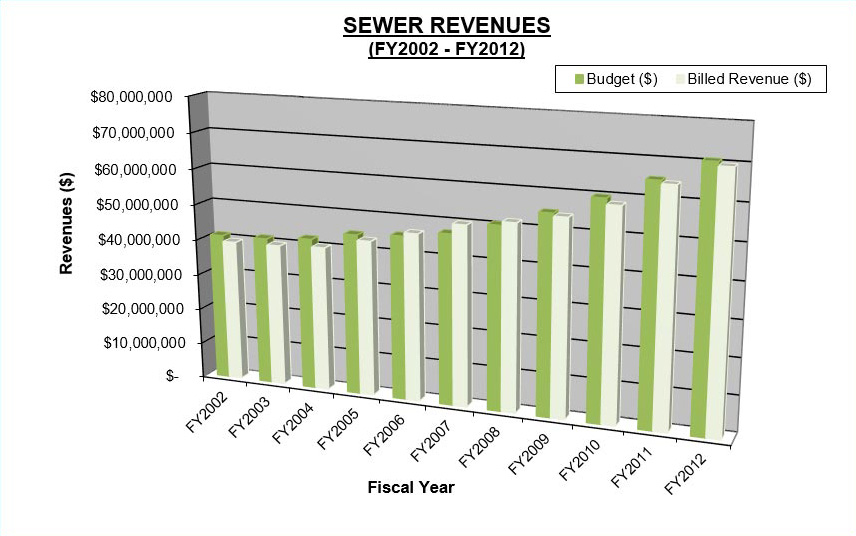 Tables 1 and 2 on the following pages show Tulsa’s Top 15 water consumers by rank for the period FY 2003 through FY2012 by consumption (Table 1) and amount billed (Table 2).  For the purpose of this table, both potable (treated) and raw water are included. 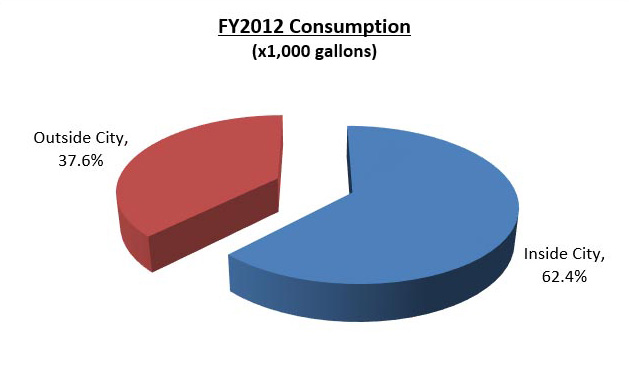 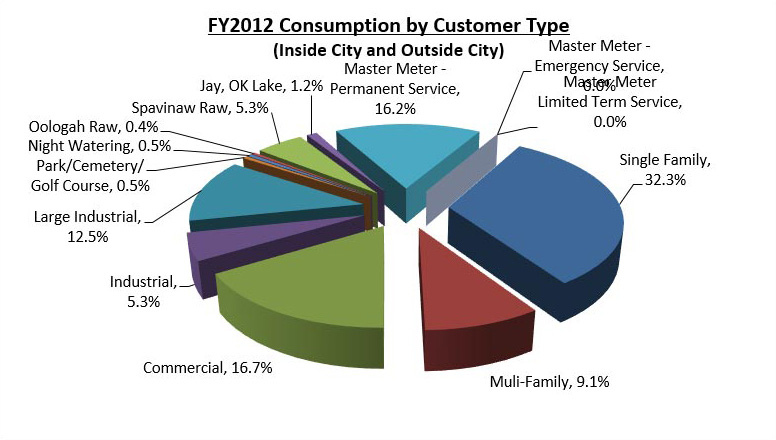 One key measurement introduced in the Comprehensive Assessment was “affordability”, or the ability of lower income households to pay continually increasing water and sewer rates.  The Environmental Protection Agency (EPA) established affordability criteria for water and wastewater systems with the 1996 Amendments to the Safe Drinking Water Act.  The four (4) percent benchmark is measured as the total annual water and sewer bill divided by the median household income for the service area.  The four percent benchmark translates to two percent each for the individual water bill and individual sewer bill.  These figures however are considered to be a worst case scenario.  The water and wastewater industries have long considered an acceptable affordability ratio for a combined bill to be within a range of 1.5 to 2.5 percent.

Table 3 shows a summary of the average consumption or usage for single–family residential TMUA customers, and the “affordability” ratio for the period FY2005 through FY2011.  The median household income was obtained from the American Community Survey conducted by the U.S. Census Bureau.  Tulsa’s affordability ratios for FY2011 are 0.79 percent and 0.64 percent for water and sewer, respectively.  The combined ratio is 1.43 percent, below both standards discussed above.  Table 4 shows Tulsa compared to other peer cities identified in the Comprehensive Assessment.

Tulsa’s peer cities pay on average 14 percent more in water and sewer rates than Tulsans do.  In 2009 the same report showed Tulsa six (6) percent below the average of the seven peer cities surveyed.  This statistic concludes that other cities are increasing rates at a faster pace than Tulsa.  Tulsa continues to be below the average of cities in this region of the country for water and sewer rates.
(Rates effective June 1, 2012 – Austin, Dallas, Denver, Fort Worth, Kansas City, Little Rock, Oklahoma City and Wichita)

Total budgeted expenditures for the FY2012 Capital Improvement Plan were $25.9 million for the water system – $4.350 million in cash from the rate base and $21.550 million in the issuance of revenue bonds.  Through the CIP review process, it was determined that some projects were not ready to proceed in FY2012 and existing capital accounts were analyzed and found sufficient unexpended funds in completed projects to enable the re-appropriation of funds to other projects.  Thus, revenue bonds were not issued in FY2012. 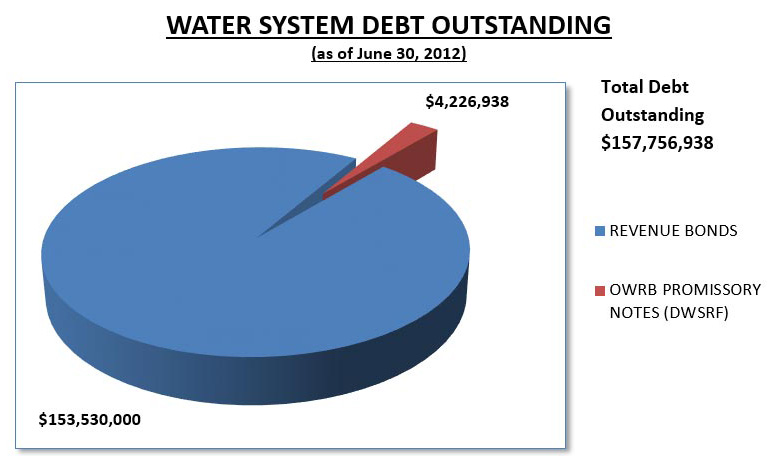 Total budgeted expenditures for the FY2012 Capital Improvement Plan were $37.588 million for the wastewater system – $2.341 million in cash from the rate base, $10.700 million in proceeds from the City’s Third Penny revenue collections, and $24.547 million in the loans from the Oklahoma Water Resources Board.  Through the CIP review process, it was determined that some projects were not ready to proceed in FY2012 and existing capital accounts were analyzed and found sufficient unexpended funds in completed projects to enable the re-appropriation of funds to other projects.  Thus, the borrowing of funds from OWRB was reduced to $14.947 million, a reduction of $9.600 million. 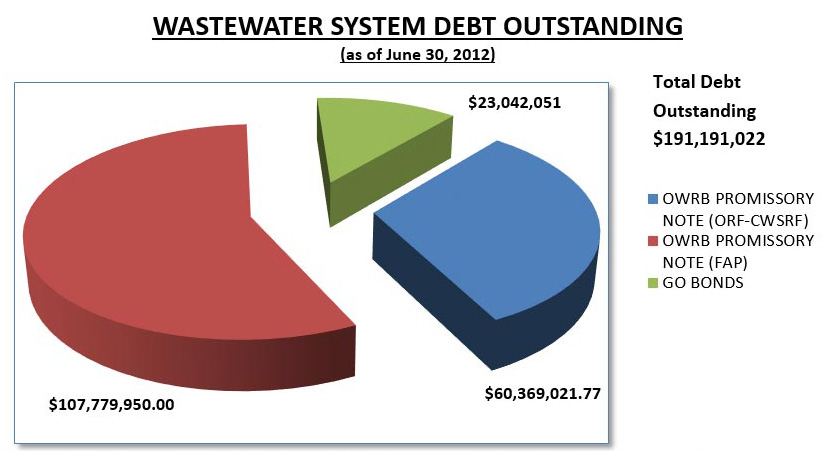 Many of our Water & Sewer Department employees are involved in professional and water and wastewater-industry trade associations.  Many volunteer countless hours and are part of the success of these organizations.  TMUA maintains membership and continued participation, through its staff, in the following professional and industry trade associations:

TMUA, through its staff, participates in American Water Works Association’s Partnership for Safe Water program.  TMUA successfully completed the Phase III Self-Assessment and was awarded the Phase III Directors Award.  The Partnership for Safe Water is a voluntary effort between six drinking water organizations, and more than 200 water utilities throughout the United States.  This achievement is no small task and demonstrates the staff’s commitment to water quality and consumer safety.